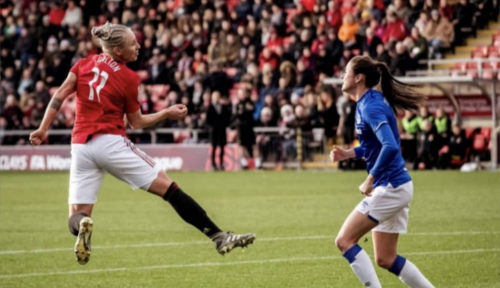 The momentum behind women’s sport is rising faster than ever before, and it’s been a long time coming.

Following record numbers of spectators in recent months, it makes sense to talk about women’s football.

The second weekend of November 2019 saw over 70,000 fans show up to watch the Women’s Super League (WSL) North London derby and Merseyside derby. To put this into perspective, in the year preceding, approximately 107,000 spectators attended 110 WSL fixtures over the course of the whole season (Source: The Guardian). According to BBC Sport, the number of spectators per WSL game has increased a staggering four times the average from last season, particularly after a record breaking 28.1 million watched BBC coverage of the 2019 Women’s World Cup this summer.

And it’s not just the fan-base that’s growing. Brands from across the world are cottoning on to the rise of women’s football and launching big-money sponsorship deals. Barclay’s, for example, announced a three-year deal with the FA Women’s Super League, and Lucozade became the official sports drinks and hydration partner of the England women’s team (source: Eurosport). What’s more, Visa has signed a ‘ground-breaking’ 7-year deal with UEFA, the first ever UEFA sponsor dedicated to women’s football (source: UEFA). This partnership, signed in 2018, was described by UEFA’s director of marketing as ‘forward-thinking’, clearly emphasising that the popularity of women’s football is showing no signs of reaching a plateau yet.

From an advertising point of view, consumer goods company giant, Proctor & Gamble, launched the famous ‘Always #LikeAGirl’ campaign which went viral in 2014 (YouTube link here should you not have seen this!). The campaign transformed what used to be portrayed as a negative phenomenon into something incredibly positive. Doing things ‘like a girl’ has now become something that both males and females alike can be proud of, with the ultimate aim of boosting the confidence and participation of young girls in the world of sport.

So, why is now the right time for companies to invest in women’s sport? Is it really worth the effort, time, and money?

Unlike much of the male sporting world, the spectator base of female sports is not guaranteed to be as large. What’s more, due to the advancements of social media and live broadcasting technology across various platforms, it is more difficult than ever to truly measure a reliable, quantitative viewing figure. With the unreliability of a reward in ROI, sponsorship of women’s sport is considered by many as a riskier investment.

At the same time, despite its risk, investment in women’s sport is relatively cheap. As reported by Forbes, the cost of sponsoring certain male Premier League clubs can be as much as seven figures, and sometimes that’s just to open up an initial conversation. In comparison, companies and brands, both big and small, can reap the benefits of investing in women’s sport on a much smaller budget. Thanks to less crowded competition, smaller companies can gain a sponsorship deal with a women’s sports team and, as concluded by Sports Pro Media, achieve the type of visibility that they would struggle to afford in the competitive male sporting world.

Not only this, but these companies can capitalise on a relatively (so far) untapped market and create a meaningful connection with a different type of audience they may not have otherwise been able to reach.

The drive behind women’s sport is not just limited to football, either, with sports such as netball, cricket, hockey, and rugby also seeing surges in spectatorship and participation from both grassroots to elite level. Brett Gosper, CEO of World Rugby, has stated that although the commercial approach to growing women’s rugby was historically bundled with the men’s game, it will now be marketed far more on its own merit. The companies and governing bodies that choose to involve themselves in this momentum are truly starting to recognise the rewards that female sport can bring them.

How far could women’s sport really go? With the US women’s soccer team having just won Time Magazine’s 2019 athlete of the year, and the likes of Dina Asher-Smith and Katarina Johnson-Thompson in contention for the 2019 BBC Sports Personality Of The Year award, it does not look like the momentum of women’s sport is slowing down any time soon. The stark rise in viewing figures, the sponsorship deals signed, and the campaigns that have been launched over the past few years are only just the start.