“No human is limited” – is it mind over matter? 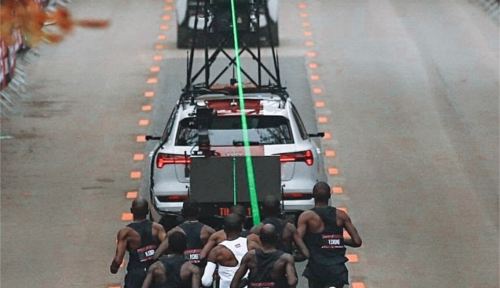 On the morning of October 12th, 2019 in Vienna, one man defied human limits and made history. Eliud Kipchoge, the marathon world record holder from Kenya, ran 26.2 miles in 1 hour, 59 minutes and 40 seconds.

Kipchoge’s astonishing feat will not be printed in the official marathon world record books. Amongst other specialist conditions, such as a flat route and an optimal temperature, his 40 pace-setters took turns in running in a V shape around him to limit wind drag. Plus, he ran the race in specialist carbon fibre Nike footwear.

Yet, against all scientists’ predictions and theories, Kipchoge still demonstrated that the human body could complete the 26.2 mile distance in under two hours. Not only that, but he still had around 20 seconds left to spare.

What will remain is Kipchoge’s inspiring legacy that “no human is limited”. Kipchoge emphasised that he was not running for the record books as he did in Berlin – he was running to inspire the generations to come. Almost immediately after crossing the line, Kipchoge said ‘…even if they say it’s not a world record, I have broken a barrier. Which makes a difference in human life, in a human family. That’s my evidence’.

Was this simply a case of ‘mind over matter’? Is psychological belief as important as physical ability? Kipchoge himself said; ‘when you set your priorities high, when you actually set your goals, and put them in your heart and in your mind, you will accomplish without any question’.

Kipchoge’s feat got us thinking about Roger Bannister, the first human to break the four-minute mile. Scientists predicted that optimal conditions, facilities, and equipment would be required to break this elusive challenge, yet Bannister didn’t need any of it. On May 6th in 1954, on a cold, wet track in Oxford, after working a morning shift at St Mary’s hospital, wearing leather shoes with heavy spikes, Bannister completed the mile in 3 minutes, 59 and four-tenths of a second.

In The Quest to Break the 4 Minute Mile, John Bryant writes that runners had been looking to break this barrier since the 1800s – and yet, when Bannister showed it was possible, it took only 46 days for Australian runner, John Landy, to do it too (this time one second quicker) at the Empire Games in Vancouver. Bryant reminds us that over the last half-century, more than a thousand runners have broken this barrier – the very same that used to be considered almost impossible.

Breaking barriers and achieving mystical feats are not just limited to running, either. In the Premier League 2017-18 season, Manchester City reached 100 points for the first time in the history of the league. Just a mere two years on, Liverpool are now on track to not only achieve this number but potentially surpass it. It seems that once hit, the bar only continues to rise.

On the topic of mind over matter, underdogs Leicester City famously won the Premiership in 2016, overcoming the 5000/1 odds against them at the beginning of the season. Leicester’s Manager, Claudio Ranieri, attributed ‘team spirit’ as one of Leicester’s most important elements to their victory. He went on to say ‘In all my career I don’t think I have known a team as strong at being together.’ Leicester have since become an inspiration to smaller teams with smaller budgets all around the world, reminding all sportspeople that miracles can happen.

England cricketer Ben Stokes, now deservedly known as ‘impossible Stokes’, produced a miracle Test run-chase in England’s third Ashes Test in Headingley last summer to keep England’s Ashes campaign alive. Stokes, against all odds and expectations, produced one of the most unthinkable and unexpected Test wins ever seen. What resonated with us the most, was that Stokes refused to celebrate when he scored the 100. In fact, he didn’t even care – he knew that his job for the team was not yet done. Australian batter, Steve Smith, aptly commented: ‘He had one thing on his mind and that was getting England over the line and you’ve really got to admire that’.

It seems that the mind is the limit. It is only when we realise that the human body is in fact capable of achieving what was once deemed impossible that others begin to follow suit.

Marathon runner and psychologist, Michael Joyner, stated that people who do unique things do so because of how much they are prepared to deplete and fatigue themselves. Regarding sports that require hand-eye coordination, Joyner agrees that hours of practice are indeed fundamental, yet there are ‘physiological limits’ to this too.

Kipchoge’s 1.59 INEOS challenge was driven with the powerful phrase “no human is limited”. Conquer the mind, and you may find that the rest is no matter at all.