When do you hit your final shot? 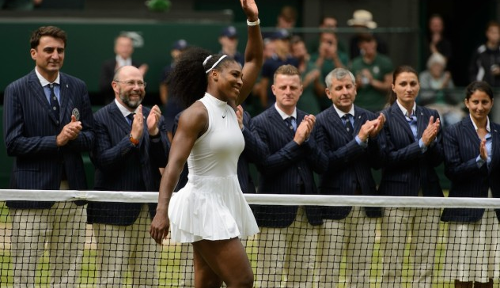 The AELTC’s decision to cancel this year’s Wimbledon Championships is a great shame, but understandable given the circumstances. This will be the first time Wimbledon has been cancelled since the Second World War. However, with new dates in place for the US Open and Roland Garros, we are excited to see the players back on the court once the world is a safer place. The question is – will we see any tennis legends retire before the game returns? For now, time is at a standstill for most sporting competitions, yet the biological clock keeps on ticking.

In February, 32-year-old Maria Sharapova announced her retirement from professional tennis. After shooting to fame at just 17 years of age with a 2004 Wimbledon victory over Serena Williams, Sharapova finished her career with no less than five Grand Slam titles.

Having endured shoulder problems (including multiple surgeries) since as far back as 2008, Sharapova had to have a procedure to numb the shoulder just to get through her match at last year’s US Open. Regardless of the result, for Sharapova it felt like a “final victory” simply to step on-court that day – this told her that retirement was close.

Yet, for Sharapova’s 2004 Wimbledon final opponent, tennis is far from over. Since winning her 23rd major in 2017 and surpassing Steffi Graf’s long-standing record, Serena Williams now holds the Open Era record – in other words, she has won more Grand Slam titles than any other man or woman since the Open Era began in 1968. What’s more, by making it to the 2019 Wimbledon final, 37-year-old Williams broke yet another record (previously set by Martina Navratilova) as the oldest Grand Slam finalist in the Open Era.

Williams has one final feat left to achieve in the world of tennis, and that is to become the all-time record holder for winning the most singles majors. It is former world number one Australian player, Margaret Court, who still holds that record. Prior to giving birth to her daughter Alexis Olympia in 2017, Williams looked almost certain to break it – but somehow it’s still evaded her grasp. Upon her return to the court, she has lost all four of the grand slam finals she has reached, and some tennis experts have started to doubt whether she will ever achieve this feat.

Whether Williams manages it or not, it is unlikely it will have any effect on her being considered one of the greatest female tennis players of all time – potentially even the greatest. Williams won her first Grand Slam at the 1999 US Open, and 21 years later, the now 38-year-old demonstrates relentless motivation to continue competing at the highest level. Williams is not only inspiring the next generation, but now finds herself playing against them, such as the 19-year-old Canadian, Bianca Andreescu, whom she lost to in the 2019 US Open final. It can’t be long before she is drawn against 16-year-old fellow American, Coco Gauff, who made her big mark at Wimbledon just last year by reaching the Quarter Finals. When Williams won her first Grand Slam in 1999, Gauff wasn’t even born.

For many professional sportsmen and women, the longevity of their career is more about the ‘survival of the fittest’ over any other factor. Yet, the length of a player’s career is also a testament to their mental strength, perseverance and will to carry on. As Sharapova stated in her retirement, her “body has become a distraction”, while 32-year-old Andy Murray refuses to let his injuries control him.

Released in January this year, Murray’s exclusive documentary Resurfacing showcased his long journey back from a career-threatening hip injury. After limping off the court at Wimbledon in 2017 following a defeat to Sam Querrey in the Quarter Finals, Murray tried pretty much every kind of physio treatment there is. As Resurfacing shows, it was risky, last-chance surgery that finally got him back on the court. Despite talk of retirement from the media, Murray continues to show relentless drive to return to his best.

Murray soon found himself back on the grass just last summer after the surgery appeared successful. He won the doubles competition with Feliciano Lopez at the Fever-Tree Championships, and then partnered with Williams to play mixed doubles back at SW19 a week later.

There is no doubt about it: tennis is one of the most physically demanding sports there is – yet, like all other elite sports, mental strength plays an equally important role.

In an interview with The Independent, Murray stated: “It’s nice to be able to win big competitions and have a high ranking and stuff. That’s great but actually the reason why I’m playing is because I love it and I need to remember that, if I’m 30 in the world or 70 in the world.” Murray went on to say “If I’m still enjoying it and still enjoying the preparations and training and all of that stuff, and I feel competitive, then that would be success for me, but I need to remember that.”

Williams demonstrated a similar mindset prior to her Wimbledon final against Simona Halep last year when questioned (by The Irish Times) about that ultimate 24th Grand Slam win: “It’s really not about 24 or 23 or 25. It’s really just about going out there and giving my best effort no matter what”.

In the men’s game, Roger Federer, Rafael Nadal, and Novak Djokovic have dominated the tennis world since 2004, now aptly named ‘The Big Three’. In fact, since the start of their dominant era, it is only Murray who has taken the number one spot from them (for a period of 41 weeks) – and for a while, ‘The Big Three’ became ‘The Big Four’.

Ultimately, these players have nothing left to prove on the court, and yet they continue to win Grand Slam after Grand Slam, year after year. However, like for all the tennis greats of the past, stepping away from the court one day is inevitable. The question is not ‘will they?’, but ‘when will they?’.

One thing is for sure: one day, every tennis player will hit their final shot and hang up their racket. Some are lucky enough, like Sharapova, to know when the time is right – others may never know. Some are lucky enough to make the choice themselves – for others, the choice is made for them. Do you decide to jump, even if you could carry on? Or do you carry on, and are you, in the end, pushed?